PageHeap is an OS flag that adds an extra special buffer after each allocation, allowing to detect instructions that overrun their buffer and signal that to an attached debugger (such as Windbg, Visual Studio, cdb).

There used to be a separate app for that: PageHeap.exe. However, it has been deprecated in favor of two new tools: Application Verifier or GFlags. 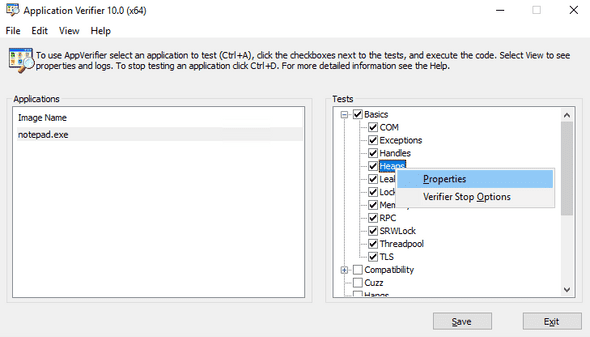 Application Verifier allows specifying a set of tests to run and signal in case of error - including PageHeap from Basics -> Heaps. gflags can achieve this through: gflags /p /enable notepad.exe /full.

It was not very fruitful. Before applying the PageHeap, I used to get random crashes. Now, I was getting consistent crashes, once I access already corrupted memory. I was closer, but finding when the memory was getting corrupted was still some tedious debugging away. Unless …

I had an idea. Debug builds are notoriously slow for a reason - they do too many checks, and that’s exactly what I needed now. I rebuilt in debug & deployed, and voila! The app was throwing exactly where the problem was happening. The problem had to do with misuse of a custom allocator that was freeing its memory without destructing underlying objects. Later on, the kernel would reclaim that space, at a random moment, and accessing that structure would trigger a crash.

Standard library and most well-written library enforce debug-mode checks for insecure code. Usually, Unit Tests catch these errors, but we’re not always that lucky. For example, Visual C++ does boundary checks in this constructor of std::vector:

Where _DEBUG_RANGE will do range checks in debug mode only. In my case, it was ref-counting checks that manifested the problem. Either way,

Running an app in debug mode is not straightforward. That’s especially true if there’s a lot of data loading involved or the app is a memory-hungry monster, as the startup can go from 5 min to hours. Here, I would recommend separating the app from the data loading logic.

Debug mode can be a lifesaver!