If you manage memory on your own, it is almost inevitable that some code, at some point, will mismanage memory. Memory leaks are one type of this mismanagement. They show the app allocated memory, but forgot to deallocate it.

It is good to have an approximate idea how much memory an app is expected to use. This way, when the app misbehaves, we can refer to that baseline and measure the impact. Once a regression is confirmed, the tough task now is to investigate which part of the code caused that - and fix it. In my experience, finding memory bugs is orders of magnitude harder, than the eventual fix that, in many occasions, is a one-liner.

One day, I found out one of my services, running in a cloud cluster, is using a couple hundred MBs more than expected. There was one issue that differentiated this from a standard memory leak: the leak took place excruciatingly slowly: 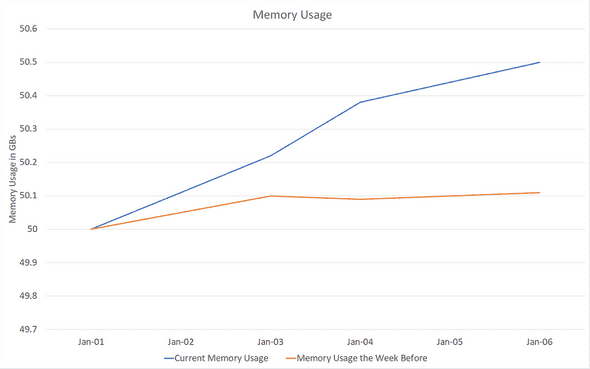 Note how the issue only materializes several days after running without restart, and even a week after, it only accounts for a 400 MB leak, a measly 1% of total app memory usage. (From here on, I refer to memory usage and private bytes interchangeably).

Note: fluctuations in memory at the healthy state the week before - the orange line - are caused by cache saturation and data reload. This does not make leak detection any easier as what looks like a leak might just be a heavier-than-usual data drop.

XPerf is the first tool my hand goes for, but it didn’t work here. Ever tried to run an ETW capture for one hour? Probably not - because it is humongous. An hour under high QPS guarantees a file that is almost impossible to analyze or copy around in raw format. Even then, with the snail-paced leak at hand, one hour might not be enough. It could have too many false positives to judge where the leak is coming from.

Note: peteronprogramming has a rather interesting work to improve on XPerf’s compression and file size overall. I am yet to try it myself, but let me know if you have!

XPerf probably could have gotten the job done, eventually. It has got great tools for heap analysis, and I am sure to cover it in a future post. For the case in hand though, it would not have accomplished the job efficiently enough. Note that a circular buffer would not work for this too. While a circular buffer allows to limit the captured ETW log size, there is no way to know for sure that the past 10 minutes contained a significant lead to the leak.

Slow leaks are harder to catch using XPerf, because of the enormous generated files. That’s where UMDH shines best: it’s considerably lightweight to run over vast periods of time (think days). To achieve that, it provides just enough information to diagnose a leak: how big were allocations that never got deallocated & their callstack.

User Memory Heap Dump is a tool by Windows that attaches to alloc/dealloc functions in the heap manager, and records when a specific process calls those functions. It is possible to take snapshots of this recording, and diff those snapshots. The workflow of UMDH boils down to:

*Note that if the leak happens on startup, it is possible to take just one snapshot, with no need for diffs. For startups leaks, however, XPerf might be a more suitable tool.

How to Run it

In order for UMDH to be effective, we need to turn on the global flag Create user mode stack trace database:

Then, we restart the target process if it is already running. We can dump snapshots of this recording through:

Don’t forget to direct the environment variable _NT_SYMBOL_PATH to correct symbol resolution stores, otherwise stacktrace will be much less useful:

UMDH, although powerful in its own context, could definitely borrow a little brush up for its output from WPA. The logged file is basically a list of allocations:

A list of single allocations is not useful. To decipher it we need to run:

And the last step produces the analysis log we need: 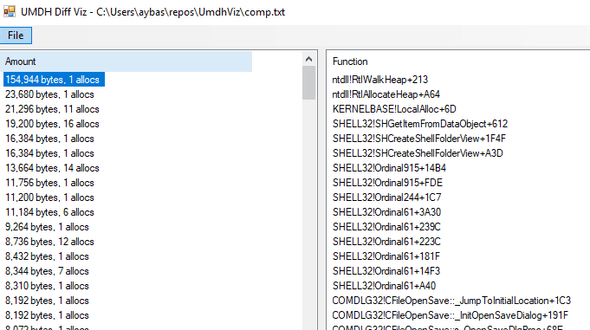 See, UMDH becomes most useful in comparison mode, where multiple snapshots (starting point and endpoint) are captured and diff’d into an analysis log containing the allocations happening in between. This was immensely helpful in my case - I am not interested in the first 50 GB of expected allocations, but the unexpected extra 200 MBs.

With UMDH under my belt, the rest was straightforward. I ran it and took two snapshots, one after app startup and stabilizing of cache, and another one day later. The size of the log? A mere dozen of MBs! That was specially the case because allocations are produced repeatedly by the same callstacks, so only the number of allocations is increasing. The offender laid there in top 5 allocation callstacks. It was a small object in a shared_ptr that, under special circumstances, gets a circular dependency on another shared_ptr.

UMDH has a tightly stripped-down version of XPerf’s extended heap capturing capabilities. While not nearly as powerful, in several scenarios it is good enough.

Note that UMDH might not be of use if you can’t restart the process to enabling the user-mode callstack capture. For example, if the issue at hand happens rarely or is hard to reproduce, live debugging or XPerf might be a better idea.